Now it turns out that there is a big lump of sand in the middle of the Solent called the Bramble Bank. Almost all racing yachters know it's there and almost all racing yachters have run in, or on to it, at one time or another. This Sunday's HYS Hamble Winter Series race coincided with low water and a shifty, northerly air stream. As PRO Kathy Smalley so eloquently pointed out in the clubhouse post race, race management is relatively easy with a steady breeze and lots of water, but when there is a lack of water and a fickle breeze, things become difficult for both race teams and competitors.

Two longstanding HRSC members and regular winter series competitors, took it upon themselves to chart the edge of the Brambles on Sunday, no doubt to show other boats where not to go. La Nef IV, X-332, John Noe, was the first to own up to a gentle grounding, with the excuse that "Someone had indexed our depth reading to read Max depth for the day. Not much use crossing a shallow patch!" John added. Hot Rats, First 35, Robbie and Lis Robison also decided to clean the bottom of their keel. Lis, when describing their "Less than glorious performance" managed to pick out the positives however. "We did not have to jettison the Ham and Tomato in Black Olive Ciabatta sarnies to get off." How the other half lives! In addition, she added "We manged to pull back two places on the last beat" 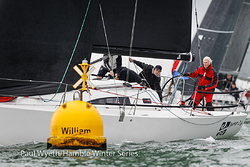 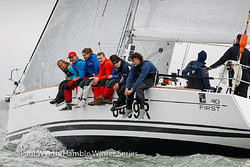 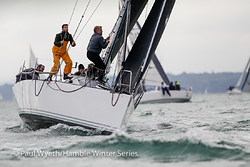 In order to make the most of the lack of water and the northerly 6-12 knot airstream, the CV, Wetwheels, anchored just west of Hill Head (4M). To add to the already tricky conditions, with low water at 1300, the tide would stop going in a westerly direction and start going in an easterly direction at about 1200. A series of windward/leeward legs round the Solent's fixed racing marks was the order of the day. The shared first mark for all classes was William (4L). There followed a number of ups and downs, the number and length of which depended on the class you were sailing in. RORC (30) and West Knoll (3Y) were the two leeward marks that looked most entertaining. It is well known that you can sail into West Knoll, go round it, and run aground on the way out. Don't ask me how I know! The very kind and generous PRO did warn the teams, on VHF, that rhumb line sailing may not always be possible in the tricky conditions. Were you listening John and Lis?

IRC 1 and IRC 2 starting at 10.30 and 10.35 respectively had the same 10.8 mile course. Jester, the Lutra 30 of Michael Lewis, is enjoying the missing Cape31s and posted a second, first place on the run. Jester has now crept into first overall with two races remaining. Jolene, J111, Julie Fawcett, was only 23 seconds adrift in second. Galahad of Cowes, First 40, Ronan Banim, came out for only the third time all series and posted a third place.

IRC 2 saw the debut of Mrs Freckles, Corby 33, Eivind Boymo-Malm. Eivind is of course from One Sails who were this weekend's day sponsors. To make matters even more interesting, he has been sailing two handed this season with Mike Yates on the J109, Jago, and the current IRC 2 leader. Mrs Freckles diplomatically placed second to their customer, Jago, on the day. There is a suggestion that this happened because one of "Freckles" crew, a local expert from Warsash, took them towards a wrong mark. Rob Cotteril's J109, Mojo Risin, placed third. Despite their unplanned lunch break, Hot Rats had the good fortune to discard their fifth place finish and are now a solid second overall. It is worth noting that Jago beat the whole of IRC 1 on the water from five minutes back on the start. Mike put it down to good navigation round the Brambles "No buckets and spades needed" he quipped and, "a final beat using the wind shifts to take the win." Jago now has a 12 point gap to Hot Rats. 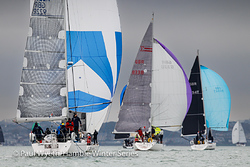 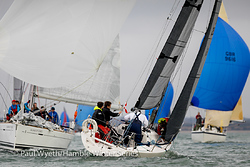 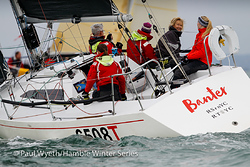 The battle for IRC 3 between With Alacrity, Sigma 38, Chris and Vanessa Choules and Quokka 9, Half ton, James Crew, shows no sign of abating any time soon. This week it was Quokka who took the first spot with WA second. With Alacrity just has its nose one point ahead in the series, curtesy of one more win, five to Quokka's four. Double trouble, SJ320, David Thompson placed third on Sunday. La Nef IV was only 17 seconds back in fourth, despite its visit to the beach.

Finally, on to IRC 4. The resurgence of the small boat. It was pointed out, somewhat romantically, that the top four places saw France beat Spain who beat Ireland with the UK in fourth. But this was just where the boats came from originally and where they got there sail numbers. In fact, the first two boats, the Quarter Tonners, Protis, Ian Southworth and Cote, Jason Owusu are British owned. Third, were our favourite French couple, Sophie Chudziak and Betrand Malas, sailing M'enfin!? In fourth was that quintessentially English gentleman, Barnaby Smith, in Imptish. The story of the day however, was not that Banter, Mustang 30 Mk 11, Ian Handley and Tim James had disappeared down the list to sixth place, but that Cote, sailed by the kids from the Greg Academy, ended up only 26 seconds behind Protis. As one wise Race Officer commented afterwards "Watch out, the kids are coming!"

Back in the HRSC Clubhouse Eirvind and Wilf, sail designer extraordinaire, from One Sails, distributed the day prizes. All first place boats now have a One Sail's bag and two T-shirts, whist those in second have two T-shirts with a red wine stain on them! Third place boats had to make do with three clean T-shirts.

Next week NJO Sails from Shamrock Quay are the day sponsors. 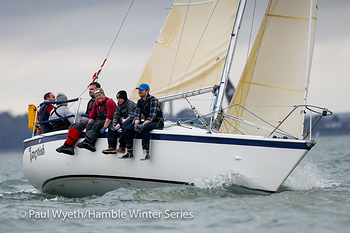